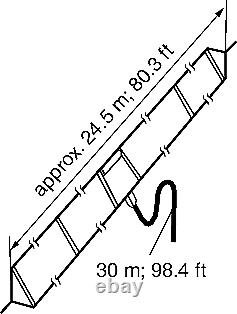 Intended for military use, the Icom AH-710 (also known as the Yaesu YA-30) is so simple to use. Just open the box, roll out the antenna (which is fully assembled) outside where you want to erect. Connect the supplied high quality coax cable assembly (terminated with PL-259's so you don't even have to fit any plugs), to the centre socket. Haul between two points, (with the supplied 10m of nylon rope) up to a tree (and or post/end of wall), plug into your rig and use.

For best DX try and get the AH-710 at least 15ft off the ground, it doesn't matter if it slopes and higher the better. The highest quality components are used throughout. Constructed in a die-cast aluminum chassis with surface mount components, the IC-M710 is designed for long hours of operation in the harsh marine environment. For the use with the following products. IC-706MKIIG : Multi-band (HF+6m+2m+70cm) mobile transceiver (Discontinued). IC-718 : HF All Band Transceiver. IC-M801E : MF/HF Marine SSB Transceiver. IC-M801GMDSS : MF/HF Marine Transceiver (Discontinued). Covers all allowed bands between 1.6 and 27.5 MHz. 2182 kHz alarm built-in (optional for General versions).

This item is in the category "Mobile Phones & Communication\Radio Communication Equipment\Antennas\Ham/Amateur Radio Antennas". The seller is "radiosuperstore" and is located in Woburn Sands, Milton Keynes.