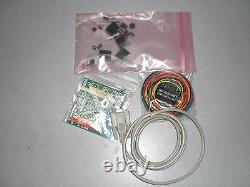 Do you own one or more of these fine rotators? If you do, you know that for all their faults they are still some of the best rotators available. Now, by adding Rotor-EZ With RS-232 Computer Control to your rotator control, you can bring these units up to date with all the features of rotators or rotator controls costing hundreds of dollars more, all while eliminating the faults! Rotor-EZ With RS-232 Computer Control starts by adding a really neat and unique auto-point feature, which is easier to use and more accurate than the "preset" capability offered by any competitive rotator or rotator control. This allows you to quickly, simply and accurately point the antenna, then press the brake paddle momentarily and let go, freeing your hands for other things, perhaps such as panic band change thanks to a packet spot called in for a needed station.

Rotor-EZ With RS-232 Computer Control protects your rotator, with electronic end stops, provision for coasting, and start-up jam prevention, especially useful for TailTwisters. You lose no utility with these features, but add significant protection for your rotator, antenna and tower. These features can be bypassed if desired.

Rotor-EZ With RS-232 Computer Control offers full support for antennas set at 90° to the main antenna. Ground a circuit lead and the meter needle moves 90 degrees to show the bearing for the offset antenna.

And, an LED lamp pulses to remind you that you are in the offset mode. Perfect for the forty meter "shorty-forty" or the WARC band offset antenna sharing the mast with your tri-bander!

Rotor-EZ With RS-232 Computer Control is offered as a circuit board kit that you add to your rotator control unit. Everything needed except solder and tools is included. Featuring sophisticated microcircuitry and firmware, the board can be assembled and installed in a few hours. All functions are accomplished in the control unit, and no tower climbing is required to fully implement Rotor-EZ. The board fits in and works with all CDE, Ham-M, Ham-II, Ham III, Ham IV or TailTwister rotator control units that have three control paddles on the front. Computer Control Mode: Complete hands off rotor control through your rotator software. Rotator software such as Ham Radio Deluxe or N1MM Logger (as examples) will operate your rotator without physically touching your rotor controller. Rotor-EZ With RS-232 utilizes the standard Hy-Gain (or Idiom Press) DCU-1 command set to control your rotator. Manual Mode: The rotator control works as before; pressing the brake and a paddle turns the antenna. However, Rotor-EZ With RS-232 Computer Control provides an automatic 5 second time delay before the brake resets after paddle release, allowing the antenna to stabilize before the brake locks note that after Rotor-EZ is installed, the LED's - if supplied in the original configuration of the box - do not light when the unit is manually controlled, although the meter functions as before. However, normal operation using Rotor-EZ will rarely require manual operation, and when using the Rotor-EZ With RS-232 Computer Control features, the LED's do illuminate as appropriate. Auto-Point Mode: What was the calibration knob becomes your pointing control (the calibration function is now an internal one).

When you turn the knob, the meter function automatically switches from reading the existing antenna bearing and instead becomes the aiming pointer, captured by the aiming logic of the circuit. Rotate the knob, moving the needle easily, precisely and accurately to your desired bearing.

Then, a brief press of the brake paddle begins rotation, and your hands are free! When the antenna reaches the new bearing, rotation stops, and after a 5 second delay the brake sets.

LED's signal the motion, and how near the antenna is to the new bearing. If the TailTwister program option is selected (all program options are selected by PC board jumpers), when command execution begins the rotator first pulses in the opposite direction for 1 second in case the brake is stuck, pauses 1 second, then turns in the proper direction. This routine virtually ends Tailtwister start jams. If the antenna still does not move within a few seconds, an LED signals a rotation problem and the rotation command is cancelled. Another program option adds electronic end points. If enabled, this Rotor-EZ With RS-232 Computer Control option limits the rotation range to exclude the last 5 degrees on either end of the scale, preventing the rotator from jamming on the end stop. The rotator can still be manually turned into these areas if needed. 90-Degree Offset Capability: Now standard in all units.

When active, the offset moves the meter needle 90° right or left, supporting the offset antenna. The plus or minus offset is controlled by a circuit board jumper. Grounding a circuit board lead, either by a switch added to the control box or by an external control such as a set of relay contacts, activates the offset capability. The 90° offset capability is fully supported in each mode (manual or auto-point). What differences will Rotor-EZ With RS-232 Computer Control make to your operating?

Active operators using Rotor-EZ tell us that they find they use their rotators a good deal more because of the greatly enhanced convenience. Checking out long path, looking down secondary propagation paths, or testing for crooked path signals are all easier.

Also, they find themselves tuning different bands more frequently, because turning the antenna for the optimum path on a different antenna is so easy and painless. In short, they wonder how they ever got along without it! 5 second delay before releasing brake after any operation. Full manual override always available. Algorithms to deal with pot strip "dead spots". Control Accuracy: better than 3 degrees. Programmable overshoot option for large arrays. Full 90° offset support for secondary antenna. LED's give brake and rotational status.

Complete and comprehensive assembly and installation manual is provided with the Rotor-EZ With RS-232 Computer Control Kit. Our Ham Supply RS-232 DB9 to USB converter cable. Used with our Ham Supply / Idiom Press Rotor-EZ w/RS-232. And also our Yaesu DXA.